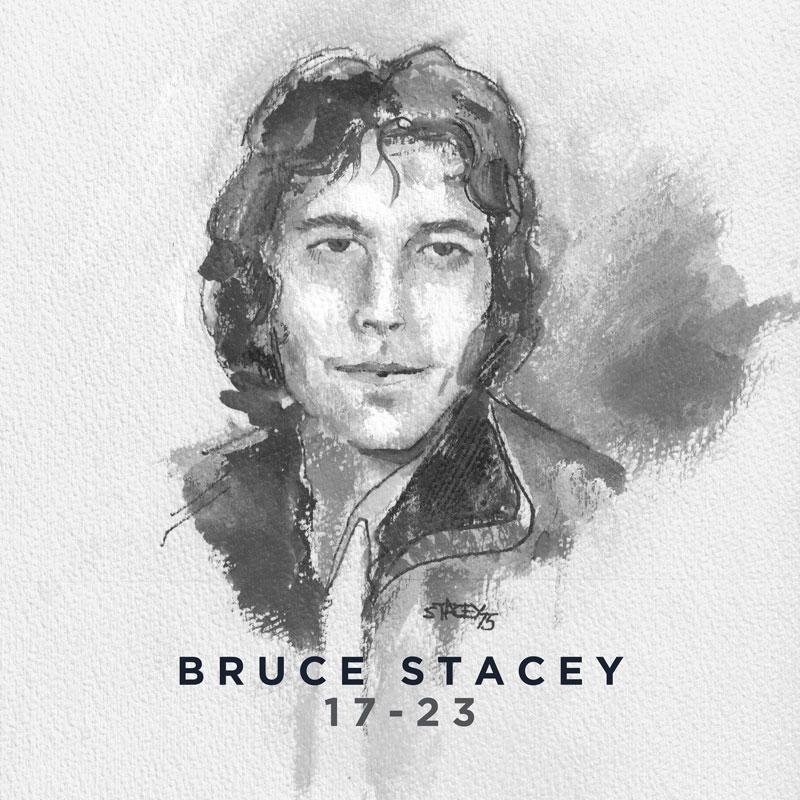 17-23 is a time capsule of Bruce’s earliest compositions and recordings made between 1971 and 1977. Five of the eight tracks were recorded entirely by Bruce on a consumer reel to reel tape deck running at 7 1⁄2 i.p.s. The balance of the songs represent Bruce’s earliest studio recordings, including “Everyday” which was released as a single and enjoyed radio play in Ontario. Bruce considered the songs “working tracks” or “demo’s” and so the majority were only shared on audio cassette with high school friends at the time. The cover art for the album is a self-portrait sketch that Bruce painted in 1975 at 21 years of age.

“The process of discovering these old tunes started in 2020, when I decided to digitize and re- master some of the original Stacey Band albums. Sitting in the same storage closet with those album masters were these ancient, 7 1⁄2 i.p.s. reel to reel tapes… some dating back 50 years!” The process to transfer and restore the old recordings was a labor of love. Many of the songs were recorded on a vintage, consumer reel-to-reel tape recorder that had a “sound on sound” feature. “I would start using one microphone to record drums on the left channel. Then I’d plug the bass guitar into the right channel, while mixing in the recorded drums. Next, I’d record over the original drum track, bouncing the mixed drums and bass across to the left channel while adding a guitar part. The process would continue until I finally recorded lead and backing vocals.”

The songs reflect the technical limitations of the recording process at the time, but they none-the-less have a unique charm and appeal. The one-take spontaneity of many of the tunes is both energizing and refreshing, while showcasing Bruce’s versatility on various instruments and his budding talent as a songwriter. Bruce explains, “Many of the original recordings were essentially un-mixed with vocals placed hard left and levels really out of whack. I used amazing, state-of-the art audio software such as iZotope’s, RX 9 Music Rebalance to separate individual music elements and re-balance the audio. Then I mastered each track using Abbey Road TG Mastering Chain software. The result is pretty cool, when you consider I recorded most of these songs sitting cross-legged on the floor of my grandparent’s basement.”

Of the eight songs on the album, only three tracks were recorded in a professional studio setting. Bruce comments, “Back in those days, recording in a studio was way beyond my means , so only three of the tracks (Everyday, Hold On and Do You Love Her Enough?) have that distinction.”