Previous Next
THE CHOICE – Animated Film for EXPO 2000, Germany 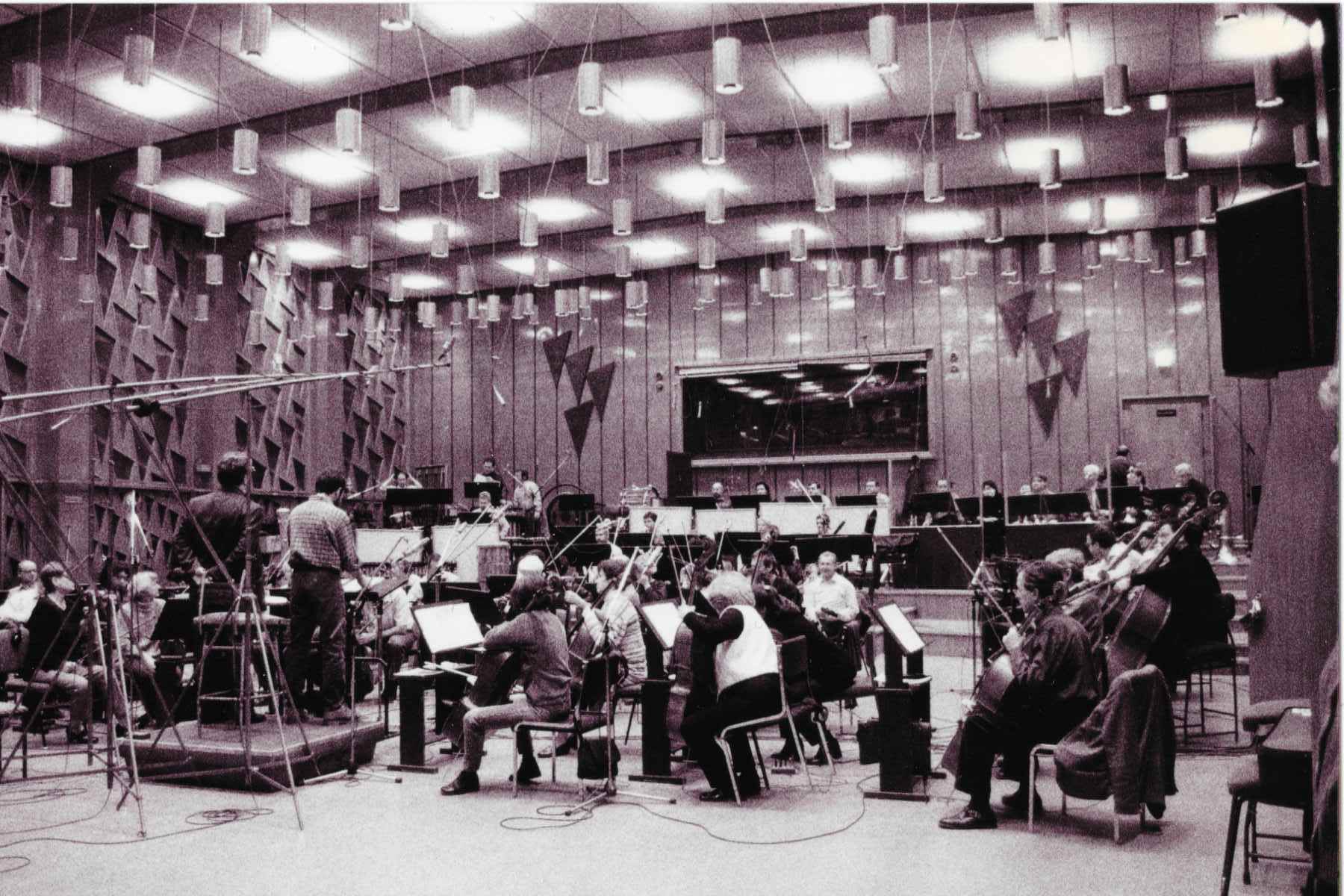 Recording the musical score for “THE CHOICE” with the Budapest Symphony in Hungary. Bruce’s animated short film was produced for the official youth pavilion of Expo 2000 in Hanover, Germany. Bruce wrote and directed the film which ran for 5 months as feature presentation at the Pavilion of Hope. He and  composer and arranger Howard Baer collaborated on music for the film. The world exhibition was attended by more than 25 million visitors.

MUSIC FOR THE FILM WAS RECORDED BY THE BUDAPEST SYMPHONY 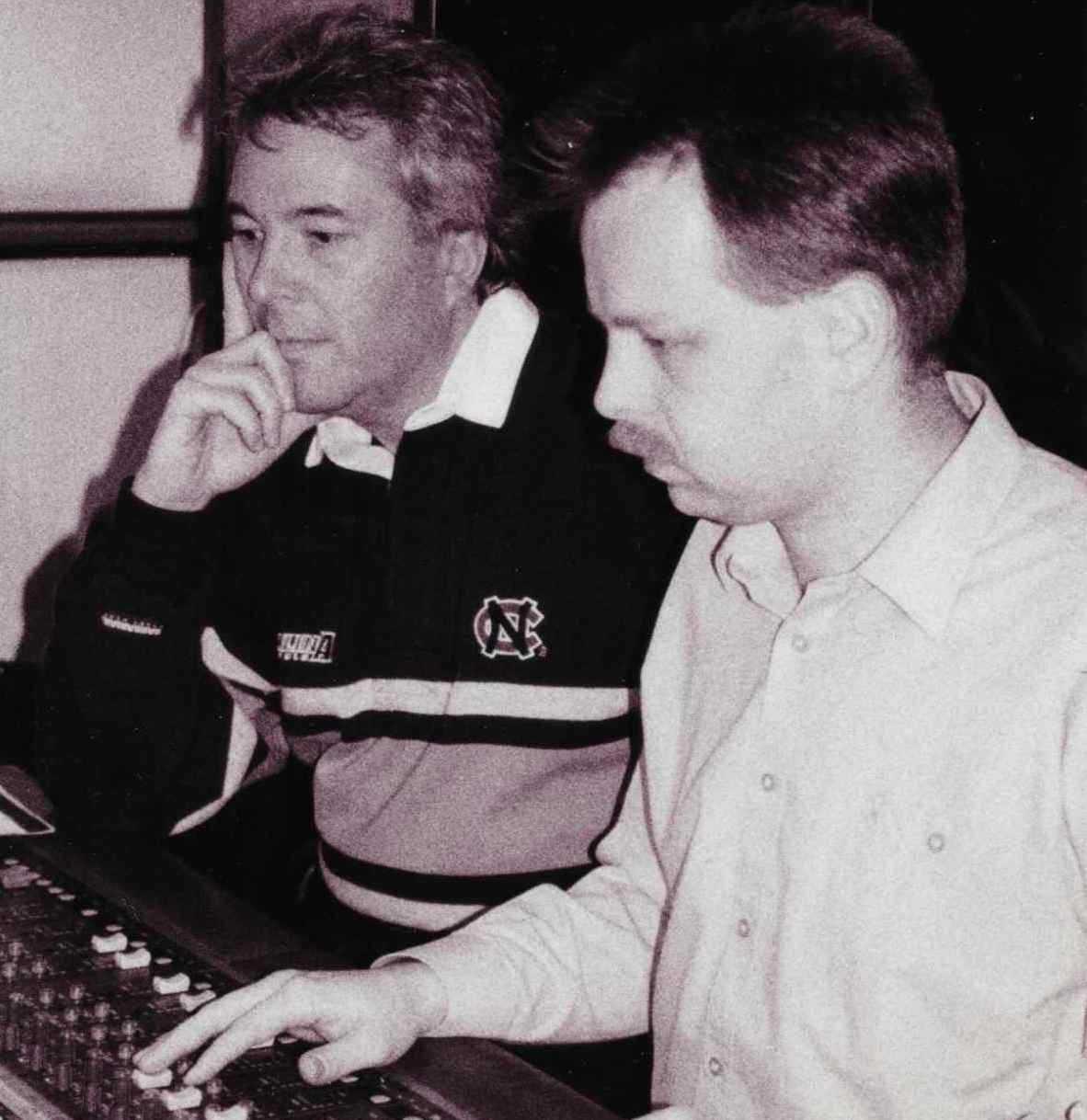 Bruce working with engineer in Budapest recording studio control room, during the summer of 1999.

THE CHOICE – The Biblical parable of the Prodigal Son, re-imagined for EXPO 2000 in Germany

In 1998 Bruce was invited to join an international think-tank meeting to discuss creation of a faith-based youth-pavilion for EXPO 2000, the world exhibition which was coming to Hanover, Germany. The gathering took place in Canada and included leaders from sponsoring organizations including; Ulrich Parzany – Secretary General of the YMCA Germany, Roland Werner – Theologian, Günther Bitzer – German Director of World Vision, David Mainse – founder of Crossroads Christian Communications Inc. in Canada and Rob Adsett – Thomson Adsett Architects, Australia. The group had commissioned proposals for the feature media presentation at the pavilion and Bruce was among those invited to submit a concept. The theme of EXPO 2000 revolved around ‘developing responsible solutions for the future’ and the group wanted to present a unique youth perspective that reflected both the theme of Expo and the Christian mission of their organizations. Bruce presented a concept based upon the Biblical parable of the Prodigal Son… with a unique, creative twist. The familiar story would be set in the future, and would illustrate not only the personal consequences of the prodigal’s choice, but the impact it made on the world around him. Bruce promised an engaging animated adventure including a wild-ride through Millenia, a “city of dreams” where the prodigal foolishly spends his inheritance and is left broken and destitute. The climax would depict his dramatic escape from Millenia and repentant return to his father where, with a changed heart and new sense of responsibility, he looks to the future.

CLICK ABOVE to view clips from the THE CHOICE and hear Bruce talk about the creation of the film and original music score for the project.

Bruce’s concept was ultimately selected by the group and he was commissioned to produce the film, which he titled, The Choice. The production process was not without its challenges. About a month into animation the contracted Director left the project, forcing Bruce to jump in and assume the key creative role. Several animation companies had been contracted for the project and part way through production Bruce realized one of the companies had been falling behind on delivery and in fact had been lying to him about their work on multiple levels. “To be honest, it was a stressful time. I was forced to deal with the dishonest president of this company while out of necessity directing his animation staff. Thankfully there were members of his team brave enough to tell me what was really going on. When I confronted him with the truth and threatened legal action he came clean and the funny business ended. There was however still a film to deliver and it took all hands on deck to get The Choice finished on time.”

“Music was the most enjoyable part of the project for me” Bruce adds. “Howard and I had worked together in the past, so we just hit the ground running.” The two shared composer credits, with Howard orchestrating the symphonic score. “It was a treat for both of us to work on this kind of project. Howard was right in his element conducting those fine musicians while I sat with my legs up behind the audio desk, loving every minute.”

Pictured below: (Left) Howard conducts the Budapest Symphony Orchestra (Centre) Howard the orchestra leader and Bruce in the studio with the orchestra’s (Right) The symphony records a cue. 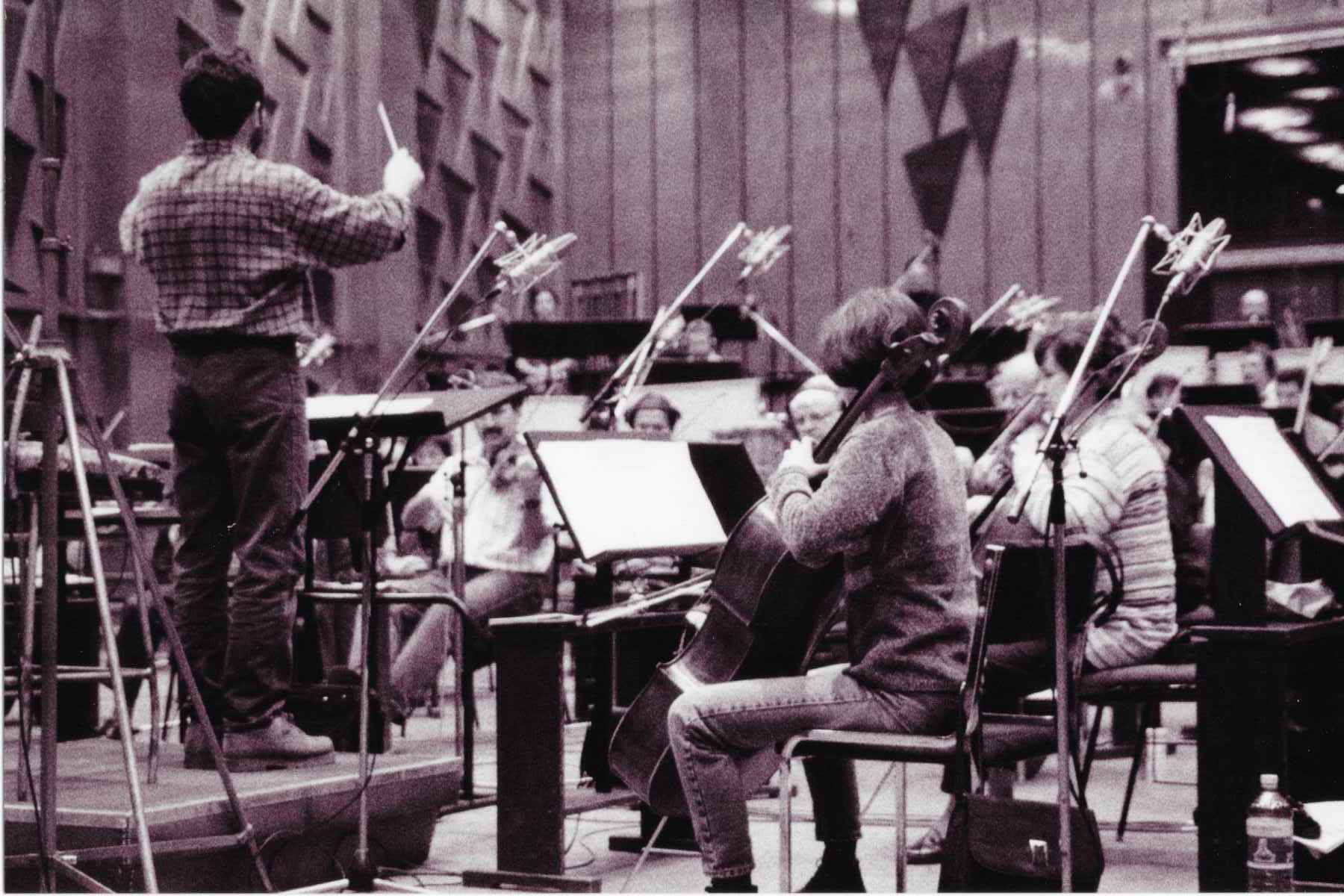 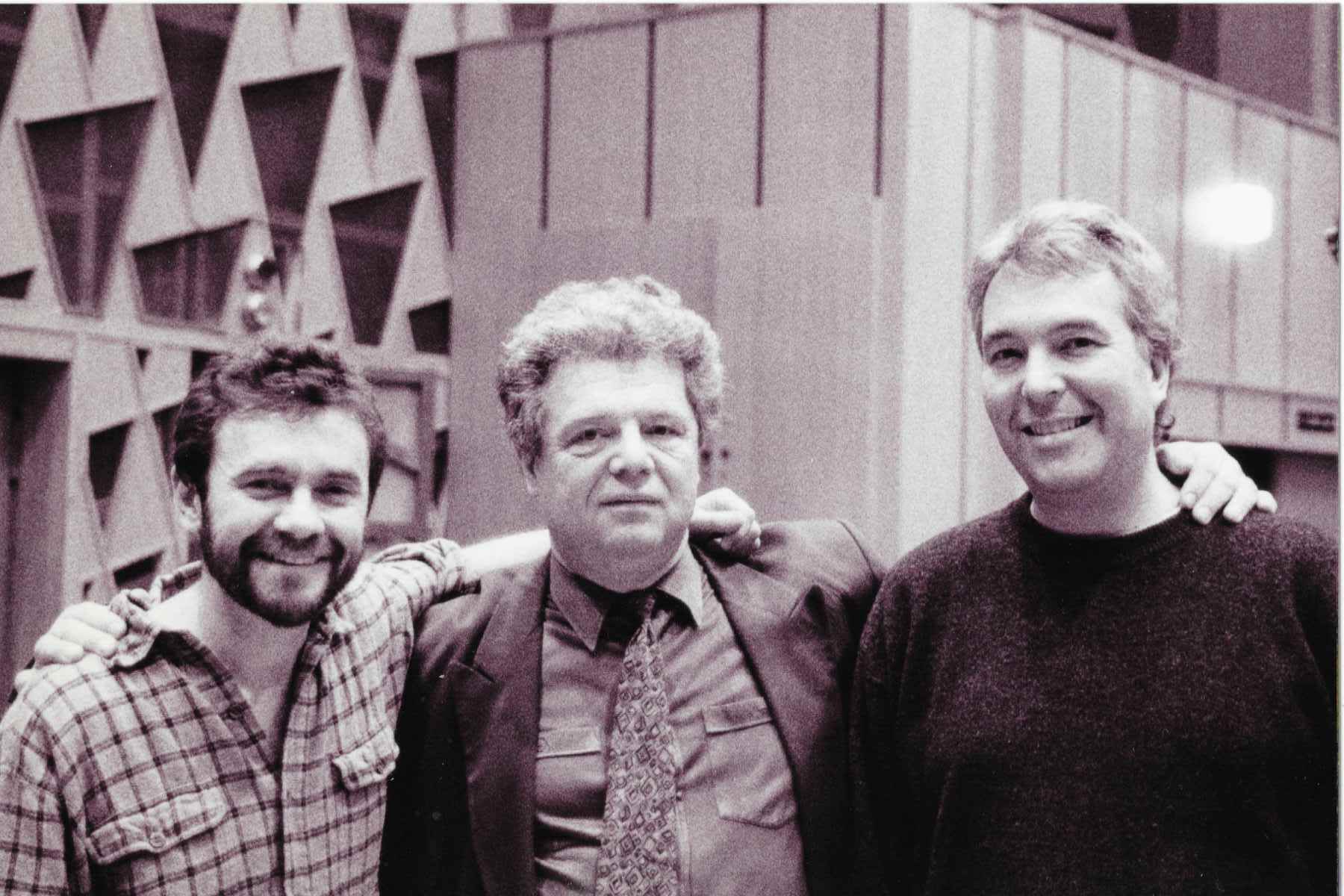 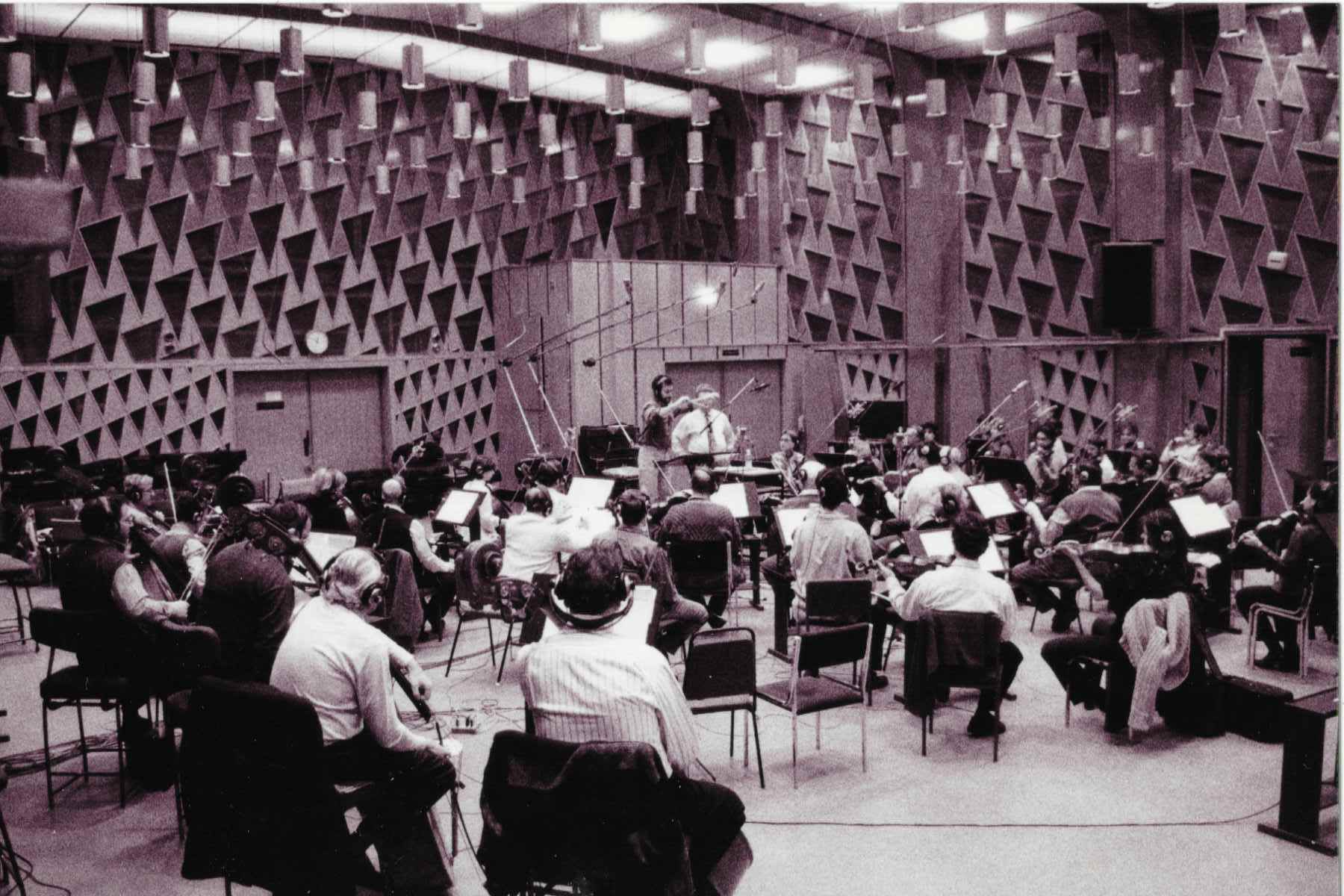